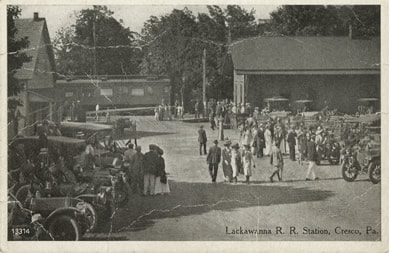 The Delaware, Lackawanna, and Western Railroad first came through Cresco in 1851. The peak use of the Cresco Station can be categorized into two periods: the Freight Period from 1851 to circa 1900, and the Passenger Period from 1900 to the 1950’s. During the first period, goods such as hatchery fish, ice, railroad ties, railroad spikes, mining timber, and sprags were shipped. Hides were delivered by rail to the tanneries and sent to market as leather.

Passenger traffic peaked during the 1930's and 1940's when people from cities made the Poconos one of their desired tourist destinations. Later, with the increase in popularity of winter sports, tourism in the winter also began to rise. At its busiest, the Cresco Station witnessed over 1,000 passengers arriving in a single day.

The original station at Oakford (later named Oakland and then Cresco) was a pile of railroad ties with a canvas roof. The present station was build in the mid 1880's.

The Cresco Station was closed in 1967, partially due to the increase in automobile travel in the United States. The Cresco Station remained abandoned until the Weiler Family Foundation began restoration of the building, replacing deteriorating flooring, structural supports, painting, restoring stained glass windows, and other renovations. Restorations to the site continue.

The restored Cresco Station was made available to the Barrett Township Historical Society in 1999 by the Weiler Family Foundation, and subsequently reopened to the community as a museum. The old baggage room was converted to an exhibit of a country store.