Cresco and the Railroad 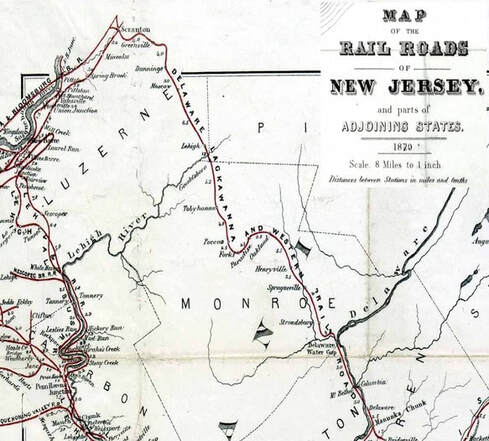 Figure 1: Portion of 1870 map, with title moved. DL&W in red; Oakland (later Cresco) near the "W" in Western.
Introduction
Cresco is a small village in Monroe County, Pennsylvania, on the edge of the so-called Pocono Mountains. One historical feature is the station building on what was originally the Delaware, Lackawanna and Western Railroad, now the Pennsylvania Northeast Regional Railroad Authority. Freight trains and occasional passenger excursions still operate past the station. This station has been preserved by the Weiler Foundation, and is presently used as a museum operated by the Barrett Township Historical Society.

This document attempts to tell the story of the station, the railroads, and nearby facilities.

Early history
The Delaware, Lackawanna and Western Railroad (henceforth the “Lackawanna”) had opened from the Scranton area north to Great Bend in 1851. The railroad built the “Southern Division” in 1856 from Scranton south to New Jersey. There was originally no station at Cresco, but soon a stop called Oakland was established. The Southern Division was built with at least two tracks through its entire length, presumably because of experience with operating the northern portion as largely a single track railroad.

Around the time the railroad was built, a separate (probably private) branch railroad was built to serve White’s Tannery in present day Mountainhome. This railroad is shown on several early maps, such as the Beers Atlas of 1875, and is also mentioned in several property deeds. The name was usually given as the Oak Valley (or Oak Valley Branch) Railroad. The Lackawanna bought the railroad in 1895, according to the Lackawanna’s Valuation Map of 1918, and it eventually became known as the Mountainhome Branch.

The Lackawanna was built to six foot gauge (the distance between the rails) and presumably the Oak Valley was the same gauge. On March 15, 1876, the Lackawanna was re-gauged to the present standard of 4’ - 8-1/2” gauge.

Constructing the railroad was a challenge. To build over the mountains, many curves were required. An example is the rather sharp curve at the Cresco station, which had a maximum speed limit of 35 mph for westbound trains (40 mph for eastbound). Steep grades were also needed; from Analomink to Pocono Summit, a distance of about 16.8 miles, the grade is a fairly consistent 1.5%. (That is, the track rises 18 inches in 100 feet.) For railroads, that is a significant grade, and helper locomotives were required.

An early account suggests that the Oakland station was simply a pile of ties with a canvas roof. Sometime around 1880, the present station was built, though the date has not been confirmed.

Over the years, the railroad built or acquired several structures near the station, and also made modifications to the station. These other structures include:
One feature of the area which is not readily apparent in 2020 was the location of the main highway through the area. In 1954, a new bridge was built to carry Pennsylvania Routes 191 and 390 (using 2020 names) above the tracks just to the west of the station. Before then, the highway crossed the tracks at grade, immediately east of the station.